skip to main | skip to sidebar

Get Your Story Out.

New tagline: For a good three years now, I've been going to HealthSouth Rehab Hospital every Sunday and teaching a weekly class called "What's Your Story?" The experience has had a profound effect on me. It's not so much a class as a chance to talk to people about their personal stories. A few of them have been told "you should write a book." More often, they have an idea that they should write something down for their families, but they don't know where to start. Some of them even insist "I don't have a story." Of course they do, and there's nothing more delightful than helping them find it.

In any case, it got me to think about defining what I do in a different way. My original tagline, which is twelve years old now, is "Making Professional Publishing Accessible—and Fun—for Everyone." To be honest, this is only a fancy version of what I have tended to tell people who ask me what I do: "I help people self-publish their books."

It's true. It's clear. I do help people self-publish their books. But it's not sufficient by a long shot. The patients at HealthSouth have helped me with that. What I really do is help people get their stories out—in multiple senses of that phrase. I get the story out of your head and heart, I help you refine it, and I help you share it with your intended audience. Getting the Story Out is taking me outside the boundaries of bookmaking into blogging, workshopping, presenting, poetry slamming, Facebooking, and letter writing. It gets me, the professional editor, beyond the planet of editing into the universe of marketing. More later. —The Publishing Pro

Posted by Kenneth Guentert at 2:29 PM No comments:

Use a Blog to Publish Your Book

Blogs belong: I like blogs. They are cheap (read: free) and, with the addition of "pages," can function as websites. One use for a blog—and I've done this twice—is to enable potential customers to preview your book. To be honest, this is a form of publishing, but I don't want to scare you. In any case, previewing with a blog tests your draft and builds an initial audience.

Using a blog to publish your book is easy enough structurally, though you'll have to work around the blog's habit of showing posts in reverse (last shall be first) order.
Whatever you decide, it's worth giving your followers some instructions. For example, the header for my murder mystery (Evil Speaking) instructs visitors to use the Table of Contents page to read the chapters in order.—The Publishing Pro

Posted by Kenneth Guentert at 2:11 PM No comments:

First things first: It's no secret that it is harder to sell novels than non-fiction self-help books. The author of a non-fiction work is more apt to have specific readers in mind along with a coherent message that will help them. The first-time novelist is more likely to be writing for the fun it, perhaps with the vague hope that readers to be identified later will find the book and send it shooting up the bestseller lists.

Here's the thing: You are more likely to be successful as a novelist if you start with someone—your core reader—in mind. At the very least, identify a genre and stay with it. Rookie authors have an unfortunate tendency to try to hit multiple genres, figuring I suppose that the more potential readers you can identify the more actual readers you will have. This does not work—not if the potential readers are confused about what you're doing—and they will be if you are trying to appeal to readers of thriller, romance, western, fantasy, and horror novels. Someday, when you are rich and famous from never-ending book royalties, you can try your hand at crossover fiction.

Two of my literary customers have had success, specifically by keeping their core readers in mind.

Cleon Ochsner, in the course of doing some family history work, obtained official Russian documents relating to the trial and execution of an ethnic German landowner in Ukraine during the Stalinist purges in 1938. His interest was piqued because the man had his own surname—he was probably the brother of one of Cleon's direct descendants. The documents became the basis for a novel called Kulak: Love and Death, a German-Russian Tragedy—Ukraine, 1938. The book has a natural audience: ethnic Germans with Ukrainian roots. It has has done well in English and is now in the process of being published in German.

Colette Holbrook Sheets, a descendant of a Mormon pioneer, had a similar story. She happened onto the detailed journal of Joseph Holbrook, including his trek from Nauvoo, Illinois, to the Mormon Zion in Utah. Sheets, a psychologist, used the medium of the novel to add flesh to the bones of the journal. Sheets died shortly after completing the draft of the manuscript, but her husband Robert saw the book through publication as Intrepid Faith: Joseph Holbrook's Trek to Zion. Robert Sheets is doing well selling the book to Joseph Holbrook's numerous descendants.

Both of these examples were what I would call "non-fiction novels," but the principle of identifying a narrow but coherent readership should work for fictional novels as well.—The Publishing Pro.
Posted by Kenneth Guentert at 1:59 PM No comments:

And why should you care? I've never gotten too exercised about Library of Congress numbers, but the following post from Indies Unlimited is about as clear as it gets.


"LCCN stands for Library of Congress Control Number. It’s a unique identifier issued by the Library of Congress (LOC) to books that get included in their collection. Some people desire this number because librarians across the nation and the world tend to catalog their books using the LCCN number. There is only one LCCN per book, whereas each edition of a book requires a new ISBN (eBook, paperback, hardback, special editions), and will likely have multiple ISBNs."

Thanks to Anne Flint, author of Fettigrew Hall and a forthcoming prequel, for forwarding the above post.—The PublishingPro
Posted by Kenneth Guentert at 12:50 PM No comments:

Writing and Publishing Your Own Memoir ... in 15 easy steps is for you. Publishing your own memoir is a terrific option. Once you know how, it will be easier, cheaper, and much more fun than you ever thought possible. 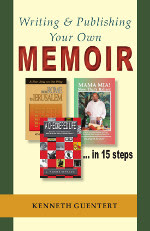 Posted by Kenneth Guentert at 1:16 PM No comments:

Think of Yourself as an Artisanal Publisher

I began to fish around for alternatives. I noted that there is a whole artisanal movement afoot, which is applied to the creation and distribution of food, beverages, clothing, household products, even shelter. The term implies an emphasis on quality over quantity, artistry over production, local over national, repeat customers over new ones. It seemed to me that self-publishers might benefit from thinking of their work as artisanal.

I tried a couple of word inventions—authorsan, authisan—but they were a mouthful. Still, I couldn't shake the idea that the authors I work with would benefit from thinking of themselves in alignment with the artisanal movement.

Quality over quantity: Print-on-demand and eBook technologies have made it possible for authors to make a profit by selling far fewer books than would have been required decades ago. For example, twenty years ago, you might have needed to sell 1,000 books to pay off your offset printing bill. Today with a small printing bill from CreateSpace—or no printing bill from Kindle—you could pay off your printing bill with one book sold. It's still tough to sell books, but it's a whole lot easier to sell 100 than 1,000.

Artistry over production: Self-publishing has a bad reputation for artistic quality because today's  technology enables authors to do so many things themselves. The result is that there is a lot of ugly work out there, but it doesn't need to be this way. Because you have little to no printing costs, you might be able to hire a copy editor, a designer, book producer, or proofreaders. My suggestion is to start with the copy editor. It's a real skill that takes a long time to learn. Technology doesn't help much with it—and yes, I am aware of Microsoft's grammar checker. It's not enough. On the other hand, you can use a free or inexpensive cover creator to do a cover. You can learn how to design your own pages on Microsoft Word. Of course, the technology doesn't guarantee good results. You need to be computer comfortable, you need some know-how, you need the time, and you need to care about the results. But some artisanal publishers are up to the job.

Local over national: This doesn't apply in the same way to books as it does to food. Books are easier to sell nationally—or even internationally. Still, authors who get out and talk to people in person are going to build more relationships and ultimately sell more books. This work is easier to do locally.

Repeat customers over new ones: Of course, you need new customers. However, artisanal producers don't build their businesses on selling to one-time customers. They are out to build relationships. In other words, they are in it for the long haul. Authors should be the same way. Besides, relationships are fun.—The Publishing Pro

Posted by Kenneth Guentert at 12:50 PM No comments:

How to Improve the Experience of Publishing

Ups and Downs: Publishing has changed enormously in the past couple of decades, but the author's experience remains the same in many ways. These stages are typical:
The above seems to be a common, almost universal series of experiences. At the same time, parts of it—especially the devastating disappointment of "Struggle II"—can be improved. To have a better experience, I suggest the following:

Posted by Kenneth Guentert at 10:05 AM No comments:

Kenneth Guentert
I have 35 years of experience in publishing, having been at various times an editor-in-chief, a marketing director, and a production manager. Currently, I am president of The Publishing Pro, LLC, whose mission is to make publishing accessible and fun for everyone.